The Mechonoids were large, spherical robots originally created to serve humans in The Chase. Mechonoids which had been sent to prepare the planet Mechanus for human colonization kept the astronaut Steven Taylor prisoner, since he did not have the Mechonoids' control codes. Daleks, following the TARDIS crew, engaged the Mechonoids in battle. It is unknown which side emerged victorious. 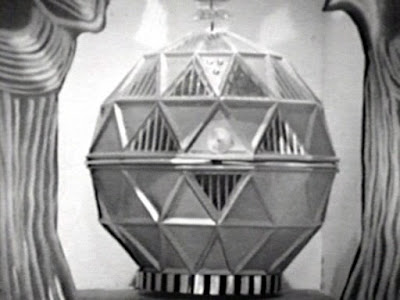 A feature entitled Dalek Wars in the third issue of Doctor Who - Battles in Time features the Daleks battling the Mechonoids on Mechanus. The Mechonoids shown are computer-generated.

The Mechanoids appeared in the comic TV 21 which featured a strip based on the Daleks, but in which the Doctor did not appear. The Mechanoids are the sworn enemies of the Daleks and a third race, blue-skinned humanoids, have to try and subtly interfere in order to keep the peace and prevent a war.
Posted by Joanne Casey at 07:00

Email ThisBlogThis!Share to TwitterShare to FacebookShare to Pinterest
Labels: Mechanoids