The Xeraphin were an ancient species encountered by the Fifth Doctor in the story Time-Flight by Peter Grimwade. Originating from the planet Xeriphas, they possessed immense psychokinetic and scientific powers. The Doctor believed the race to have been wiped out during the crossfire during the Vardon/Kosnax war. Instead, the entire race fled to Earth in an escaping spacecraft. The ship crashed near present day Heathrow some 140 million years ago. When the Xeraphin emerged they built a Citadel to mark their new home but the Xeraphin were so plagued with radiation that they abandoned their original humanoid bodies and transformed into a single bioplasmic gestalt intelligence within a sarcophagus at the heart of the Citadel. 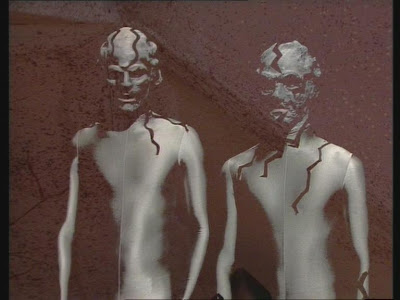 The arrival of the Master coincided with their emergence from the gestalt state when the radiation effects had subsided, and his influence caused the emergence of a split personality of good and evil, each side competing for their tremendous power while yearning to become a proper species once again. The Master, who was stranded on Earth at the time too, succeeded in capturing the Xeraphin as a new power source for his TARDIS. However, the Doctor's intervention meant his nemesis' TARDIS was sent to Xeriphas where events became out of his control.

Before fleeing Xeriphas and the Xeraphin, the Master took with him Kamelion, a Xeraphin war weapon with advanced shape-changing abilities dependent on the will of its controller. Kamelion was freed from the Master and joined the Doctor's TARDIS crew in "The King's Demons".
Posted by Joanne Casey at 07:00

Email ThisBlogThis!Share to TwitterShare to FacebookShare to Pinterest
Labels: Xeraphin