The Tractators were insect-like in general appearance, somewhat like giant wood lice. Their backs were covered in chitinous shells. Tractators had two long antennae on their head, which they used to control gravity. This power could be extended in the presence of other Tractators, as well as in properly made caverns.

It is unknown if Tractators actually possessed a true hive mind, though it would seem very possible. The Tractators used scavenged machinery as well as the parts of living beings, as machines. The Tractators originally had more gruesome technology , which was toned down by the production. The Gravis would have used a floating globe-shaped translation device, which would speak for the Gravis, cobbled together from metal parts and also a severed Human head. 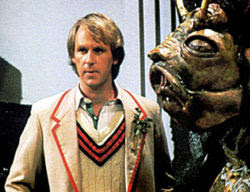 Sometime before the 20th century, the Tractators invaded Trion. As a consequence, the invasion etched itself into the racial memory of the Trions.

Millions of years later, a group of Tractators came to Frontios, but were stuck there. They waited for 460 years, until a Human ship came close enough to the planet. They made the ship crash using their gravity powers, then left them alone for 10 years in order to rebuild. They then used the asteroid belt in the Veruna System to attack the Humans, killing them and allowing them to use their corpses in their machinery. This continued for 30 years, with most of the Humans not guessing the truth of the matter.

Eventually, the Doctor was caught in the area around Frontios and was pulled in by the Tractators. While trying to help the colonists, the Doctor's TARDIS was ripped apart by the Tractators. The Doctor went in search for the cause of the incidents, and encountered the Gravis. He managed to trick him into repairing the TARDIS while he was inside it, causing him to collapse from the effort and isolating him from the other Tractators.
Posted by Joanne Casey at 07:00

Email ThisBlogThis!Share to TwitterShare to FacebookShare to Pinterest
Labels: Tractators