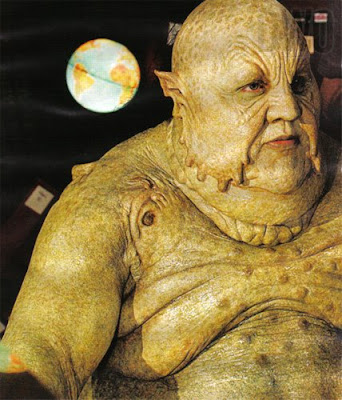 Feigning in common with the group an admiration for this mystery figure, the Abzorbaloff picked off members of LINDA one by one until he could acquire his real quarry. He planned to absorb the Doctor's memories and knowledge. He was defeated when the remnants of the absorbed members of LINDA rallied together to pull him apart from the inside. When Pope then broke the cane, the Abzorbaloff's limitation field inside it was destroyed. This caused his absorption ability to go out of control, and his body to collapse into a gooey puddle. The remnants then seeped into the ground.

The physical absorption process was begun by a simple touch and was irreversible. The faces of his victims could be seen embedded in his flesh and retain their identity and consciousness for several days at least, but are also able to access the creature's own thoughts. As previously noted, the Abzorbaloff also required the use of a limitation field (disguised as part of Kennedy's cane or the cane itself) to keep his absorption ability in check.

Email ThisBlogThis!Share to TwitterShare to FacebookShare to Pinterest
Labels: Abzorbaloff