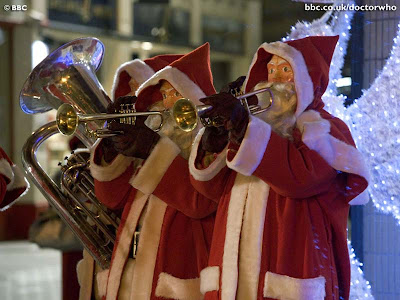 Described as pilot fish by the Doctor, these Robot Santa Clauses travelled alongside invaders who take anything on the planet of value to them before the main threat (the metaphorical shark) arrives. The Robot Santas are humanoid and dressed up in Santa costumes, but had obviously fake masks. In their first encounter in 2006, they were attracted by the energy being released by the Doctor and wanted that source of energy themselves. (DW: The Christmas Invasion) In the second invasion of 2007, they worked for the Empress of the Racnoss and were helping her in her plans.

The Robot Santas had golden faces (when unmasked), with black robes and hoods. They were armed with guns when under the influence of the Empress of the Racnoss.
Posted by Joanne Casey at 22:59