Vervoids are a type of artificially created humanoid plants.

Vervoid are the size of Humans, with pink head-like organs surrounded by petals. They can release swamp gas out of their "mouths" when panicked. They have short tendrils at the ends of their "arms" which can function as hands for simple tasks or can shoot out poisonous darts. They are covered in maple-tree like leaves which can regenerate into entire Vervoids if they are placed in soil. Vevoids grow in pods which are awoken when exposed to higher spectrum of light. Vervoids have short lifespans, living for less then a year until they decay. 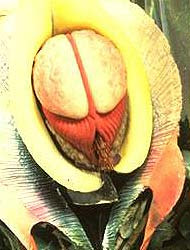 Vervoids were created by a team on Mogar in order to create a race of slaves. This attempt wasn't entirely successful, since one of the team-members was infected by vervoid pollen and the vervoids were genetically inclined towards survival. Instead of serving the Humans, they saw the Humans as a threat to their own existence. After an accident on the Hyperion III in 2986, the Vervoids were awakened early and attempted to kill all Humans. The Doctor was able to stop them by accelerating their growth rate, causing them to die from old age.