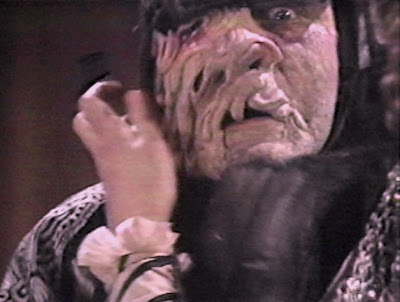 Weng-Chiang is in fact Magnus Greel, a war criminal from the 51st century, whose experiments in time brought him back to 19th Century China. There, his appearance from nowhere prompted his elevation by Chang and his friends to the status of a god. The journey through time has disrupted his molecular structure and Greel needs to feed on the life force drained from human victims, the younger and more vital the better. His precious time cabinet had been lost to him, however, and his travels (aided by a locator) have brought him and his entourage to Victorian London where he has discovered the cabinet to be in the possession of Litefoot.

Infiltrating Litefoot's home with Chang's ventriloquist doll Mr Sin (an advanced computerised children's plaything with the brain of a pig - unfortunately the pig aspect has taken over and it has become unstable and dangerous), Greel retrieves his cabinet and prepares to travel back to his own time, abandoning his long-time worshipper Chang to death in an opium den.
Posted by Joanne Casey at 07:00