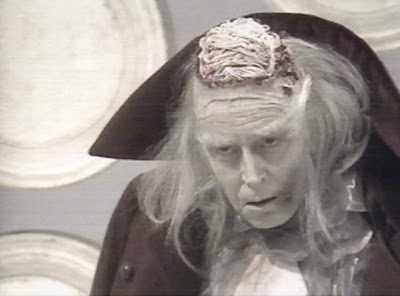 Mawdryn was the leader of a group of scientists that tried to discover the Time Lords' secret of regeneration. They stole a metamorphic symbiosis regenerator and used it on themselves, only to find that their immortality was one of unending mutation and regeneration. They were exiled from their world and their spaceship entered a warp ellipse.

Three thousand years later, in 1977, Mawdryn tried to force the Doctor to give up his remaining regenerations so that the mutated beings could use the resulting energy to end their lives. Fortunately, this turned out to not be necessary, as the Brigadier from 1977 and the Brigadier from 1983 made physical contact with each other, resulting in a discharge of temporal energy that was enough to allow Mawdryn and his companions to die.
Posted by Joanne Casey at 07:00