The Eternals are a race of cosmic beings first introduced in the Doctor Who TV adventure "Enlightenment." One Eternal who called himself Striker explained to the Doctor that he and his people lived outside of time, in the realm of eternity. They considered the mortal inhabitants of the universe to be "Ephemerals", even the Time Lords of the planet Gallifrey. Striker seemed completely unaware of the existence of the Time Lords before meeting the Doctor.

In the story "Enlightenment", the Doctor eventually realized that although the Eternals were powerful enough to manipulate matter, creating objects out of thin air, and read minds effortlessly through telepathy, they lacked imagination and creativity. Thus, they actually depended on "Ephemerals" to keep them active and prevent them from withering away in boredom. Without them, the Eternals had no purpose. This dependence was not something they liked admitting to, however, and they made boasts several times of how they could manipulate the reality around them through sheer force of will. Despite this great power, they deferred to the Guardians of Time, specifically the White Guardian and the Black Guardian who offered the Eternals "enlightenment" if they won a cosmic race. The Eternals captured many Ephemerals to win the race for them, hence accidentally bringing about the attention of the Doctor who immediately saw them as a threat. 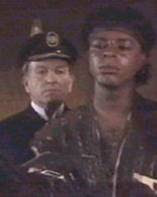 Although the Eternals were never again seen in the TV series, they have been mentioned in the new TV series that began in 2005. In the episode "Army of Ghosts," the Doctor mentioned the existence of a "nowhere place" that exists between parallel universes and alternate timelines, saying that his people called it the Void while "the Eternals called it the Howling."
Posted by Joanne Casey at 07:00