Xoanon was a malevolent artificial intelligence encountered by the Fourth Doctor in The Face of Evil (1977), written by Chris Boucher. Xoanon was inadvertently created by the Doctor on a previous visit to its unnamed planet centuries prior, when he had programmed the computer belonging to a Mordee expedition that had crashed on the planet. The Doctor forgot to wipe his personality print from the computer's data core, and as a result the computer developed multiple personalities, half of them based on the Doctor himself. 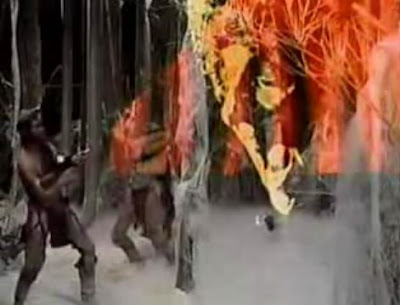 For generations, technicians extended Xoanon's capabilities, until it evolved beyond their control and became almost a living creature. It utilised the appearance of the Fourth Doctor, to the extent of having an effigy in the Doctor's image carved out on a cliff-face. Its split personality was reflected in it dividing the expedition into two tribes of technicians (who became the Tesh) and the survey team (the Sevateem), justifying its madness by thinking it was part of an experiment to create a superhuman race, with the Tesh providing mental powers and the Sevateem with their strength and independence. Enslaving the tribes, it earned the name of "The Evil One".

When the Doctor returned to the maddened world and saw the fruits of his mistakes, Xoanon tried to destroy itself and the entire planet rather than be defeated by the Doctor. However, the Doctor managed to remove his personality print from the core, restoring the computer intelligence to sanity and becoming a benign entity to the two tribes. "You have to trust someone eventually," the Doctor says.
Posted by Joanne Casey at 07:00