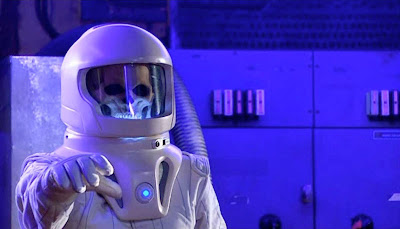 Vashta Nerada (literally: the shadows that melt the flesh) are microscopic swarm creatures which, when present in a high enough concentration, are totally indistinguishable from shadows, and use this to their advantage in approaching and attacking prey. They are described as the "piranhas of the air", able to strip their victims to the bone in an instant in high enough densities. The Doctor says that almost every planet in the universe has some, including Earth, and claims that they can be seen as the specks of dust visible in unusually bright light. On most planets, however, Vashta Nerada exist in relatively low concentrations, and are carrion eaters (on Earth, Vashta Nerada are said to subsist largely on roadkill), with attacks on people being comparatively rare (although the Doctor does attribute the seemingly irrational fear of darkness common to many species as a perfectly rational fear of the Vashta Nerada). In the episode "Silence in the Library", an unusually high concentration of Vashta Nerada had completely overrun the 51st century "Library" (an installation covering the surface of an entire planet and apparently containing every book ever written), resulting in the apparent death of everyone inside at the time. Vashta Nerada normally live in forested areas, and reproduce by means of microscopic spores (from which they hatch) which can lay dormant in wood pulp. In the episode "Forest of the Dead", this is revealed to be the reason for their unusual prevalence in The Library, as it is made known that the books and The Library itself were constructed of wood from the Vashta Nerada's native forest feeding grounds.