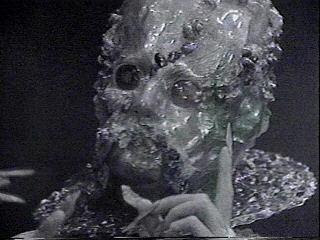 Inhabitants of the planet Telos. The Cryons were a feminine species adapted to the freezing subterranean conditions of their planet. Telos had been invaded by the Cybermen who had almost wiped the Cryons out.

The Cybermen used the Cryon technology to create vast tombs in which to cryogenically store troops. Humanoid captives working on the sun-drenched surface of Telos were instructed by the Cybermen to plant bombs which would destroy the last vestiges of Cryon civilisation, just as they were beginning to fight back.

The Cryon leader, Flast, sacrificed herself setting off a huge explosion which destroyed the Cybermen citadel completely, leaving Telos free for the Cryons to rebuild.