The Hoix were a humanoid race. They were slightly shorter than the average Human and had brown skin, sharp teeth and exposed gums.

Files by the Torchwood Institute suggested that the Hoix lived to eat, and one Hoix specimen apparently liked to eat everything. Owen Harper noted how unintelligent they appeared to be. The Doctor was aware of this and also of what effects various chemicals had on the Hoix. 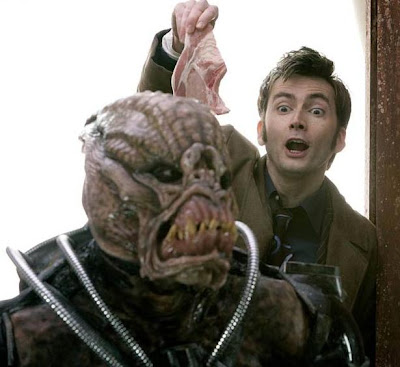 In the summer of 2007, one Hoix was encountered by Elton Pope. Pope, in search of the Doctor, had managed to locate the Doctor's TARDIS. While following voices into abandoned warehouse, Elton startled the Hoix who attempted to attack him. The Doctor was able to distract the fierce-seeming Hoix with a piece of raw meat and Rose Tyler threw a bucket of liquid at the Hoix. Unfortunately, this was the wrong bucket, which just made the Hoix angry. Rose and the Doctor were then chased by the Hoix until Rose was able to find the correct bucket.
Posted by Joanne Casey at 07:00