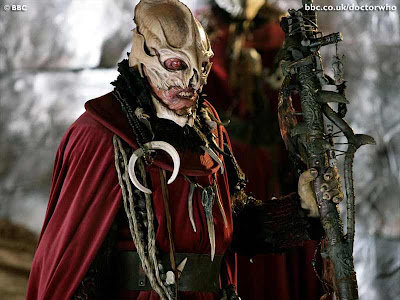 The Sycorax first appeared in the debut Tenth Doctor story, "The Christmas Invasion", in 2005. The Sycorax appear to be skinless humanoids wearing mantles of bone, usually keeping their features concealed under helmets. They are proficient in the use of weapons like swords and whips, the latter which can deliver an energy discharge that disintegrates the flesh of its target. Their language is called Sycoraxic. The Sycorax also appear to have technology that is either disguised or treated as magic, referring to "curses" and the Doctor's regenerative abilities as "witchcraft". The Sycorax leader referred to an "armada" that they could use to take Earth by force if the blood control failed. They also appear to have a martial society, with traditions of honourable combat, yet they have no qualms about killing prisoners. According to the BBC website, the Sycorax facial structure was inspired by the skull of a horse.