The Nimon were large black-skinned humanoids resembling the mythical minotaurs. Their horns can shoot out blasts of energy. Nimon drained energy direct from their victims, leaving them as husks. The Nimon have mighty, rumbling echoing voices.

The Nimon could use an artificial black hole as a gateways from planet to planet. This technology was effective but not energy efficient. Due to their high energy needs, the Nimon undertook migrations they called the Great Journey of Life. Usually, one Nimon was sent to a planet, representing themselves as a god with advanced technology where it would construct a maze-like Power Complex, a building-sized labyrinth of circuitry designed to generate a new black hole which it then used to transport more Nimon to the planet. The Nimon would then drain that world dry and move on. 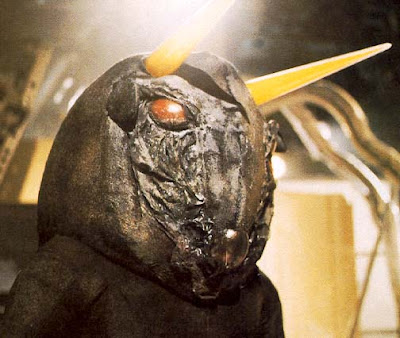 Nimon were capable of using a psioninc mind beam to transfer their power and were able to use gravitic distortions, gravitational lensing and phasing energy through an event horizon. The effect was the gift of immortality onto another being.
Posted by Joanne Casey at 07:00