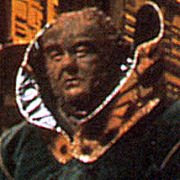 The Monarch was the ruler of the Urbankan race. He was obsessed with discovering the secret of faster-then-light travel. He believed that by doing so he would go back in time to the creation of the Universe and meet God, whom he believed would be himself.