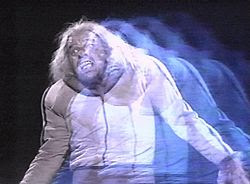 The TARDIS picks up a distress call and the Doctor and Sarah arrive on the planet Zeta Minor. There they discover that a Morestran geological expedition has fallen prey to an unseen killer and only the leader, Professor Sorenson, remains alive.

A military mission from Morestra has also arrived to investigate. The culprit is revealed to be a creature from a universe of antimatter, retaliating for the removal by Sorenson of some antimatter samples from around the pit that acts as an interface between the two universes.

The Morestrans take off in their ship, but it is slowly dragged back towards the planet due to the antimatter on board. Sorenson himself becomes infected by antimatter and gradually transforms into antiman, a monster capable of draining the life from others.

The Morestran commander, the increasingly unhinged Salamar, attacks Sorenson with a radiation source but this only causes him to produce multiple anti-matter versions of himself, which soon overrun the ship. The Doctor finds the original Sorenson, takes him back to the planet in the TARDIS and throws both him and his samples into the pit, fulfilling a bargain he earlier made with the anti-matter creature. Sorenson reappears unharmed, and the Doctor returns him to the Morestran ship, which is now freed of the planet's influence.