Haemovores were a species of vampire-like humanoids that evolved from Humans. They fed on the blood of Humans, though they could also survive in sea water, which had a similar salt content. 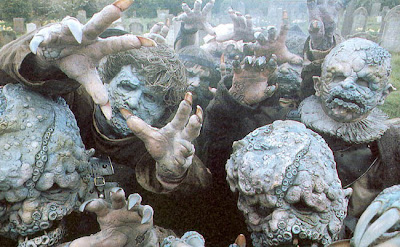 The Haemovores were known to have abnormal strength and power. They had the ability to climb sheer surfaces with ease. They were resistant to bullets and could only be killed by a stake to the heart. The Haemovores had razor-sharp claws which they used to kill people. Haemovores could weld metal with their hands and older Haemovores built up armour made out metal they collected and melted together. The Haemovores could be stopped with strong faith, which would create a psychic barrier. In the presence of the barrier they often respond with ear-splitting shrieks.

The Haemovores communicated with each other telepathically, which could be detected by telepathic Humans. They could also telepathically control Humans to a degree, making them easier to feed on. They were all controlled by Ingiger, who could kill them with a thought
Posted by Joanne Casey at 07:00