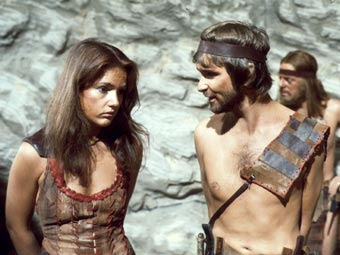 The Sevateem was an artificial cultural grouping on the unnamed planet colonised by the Mordee Expedition. The Sevateem referred to themselves as a tribe. The Sevateem were the degenerated remnant of the original expedition's Survey Team. Their development and behaviour were influenced by Xoanon as part of its experiments to contrast physical and intuitive development with mental and psychic development.

The Sevateem had a warrior culture, living in a state of permanent war with their counterparts the Tesh. Men and women were both expected to fight. Crossbows, knives, and poisonous janis thorns were all common weapons. The test of the Horda, a trial by ordeal involving vicious native predators, was also part of their way of life.

The tribe's culture revolved around the worship of Xoanon, who they believed was held captive by the Evil One (a reflection of the computer's damaged psyche). The Evil One supposedly resembled the Doctor's fourth incarnation. The tribe's priest had access to Xoanon through an almost-derelict communications array. Many other relics hinting at the Sevateem's technological origins were visible although the tribe themselves were of course not aware of this.