The Plasmavores were a race of blood-sucking near-Humans. They were commonly criminals, murdering people across the galaxy and drinking their blood.

They required blood to survive as their bodies absorbed a lot of salt. The fact that they were near-Human helped them to hide, as they could blend in with Humans on Earth. When they drank Human blood, they could assimilate its properties into their own systems and fool a Judoon alien scanner, appearing Human. 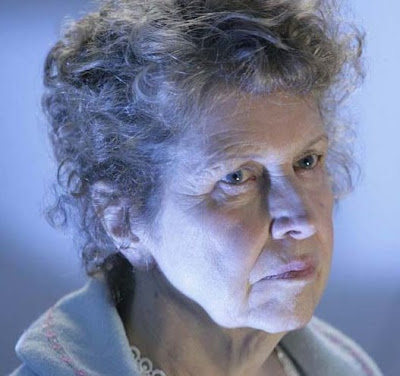 The fact that "Florence" was not identified as an alien during what was apparently a lengthy hospital stay involving several medical examinations suggests that either the species was either extremely Near-Human or able to modify their biology to fool less sophisticated scanners without the need for assimilated biomatter.

"Florence Finnegan", the Plasmavore on Earth, described herself as a "survivor", perhaps suggesting that, due to criminal associations, Plasmavores are now a rare species in the galaxy.
Posted by Joanne Casey at 07:00

Email ThisBlogThis!Share to TwitterShare to FacebookShare to Pinterest
Labels: plasmavore