Pyroviles were humanoids with a rock-based form with a magma interior. They were able to shoot flames out of their mouths, which could easily turn a Human to ashes in seconds. They could be killed by sufficient quantities of water, their internal heat being snuffed out and their bodies solidifying. They were tall beings, reaching up to about 10 metres in height and resembling oversized Roman soldiers. Pyroviles came in two varieties - a shorter, easily-destroyed "Foot Soldier" and more advanced, fully grown Pyroviles, which could reach over twice this height. 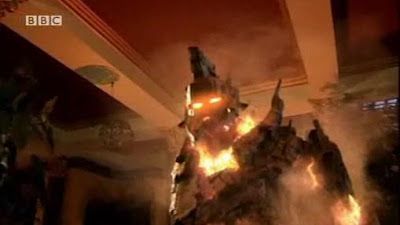 However, the Pyroviles may only have had this form since they took over the bodies of Humans.

When disintegrated Pyroviles were breathed in by Humans, these particles would slowly transform the humans into Pyroviles themselves. The individuals would slowly turn into rock, until they were entirely stone. The Pyrovilles were also able to enhance the latent psychic powers that Human brains possess.
Posted by Joanne Casey at 07:00

Email ThisBlogThis!Share to TwitterShare to FacebookShare to Pinterest
Labels: Pyroviles