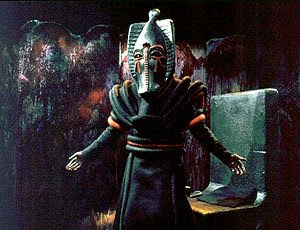 Osirians, despite their name, looked somewhat like the traditional depictions of Set. They had grey skin, jackal or donkey-like heads with large, square ears and bright green eyes. However, those of high status in the Osirian Court were able to change their appearance, adopting a series of different animal heads according to whichever is in fashion. They had expanded brain-cases and a cerebrum like "a spiral staircase", which means they particularly liked puzzles. Osirians also had a wide variety of advanced psychic powers, including mental and physical projection, mind control and telepathy.

Osirians can live for thousands of years, even without sufficient food or water. Despite this, they do need air to survive and can suffocate. Osirian curry was best served close to absolute zero, which suggests an especially resilient digestive system.

At least one member of the Osirian Court was of an entirely different species to the others: Thoth, who has dominion over time.