The Beast was a colossal demon locked away in the heart of planet Krop Tor. He said that he had many names, including Satan, and claimed to be the essence of all Devil-like figures in religion and myth. He also claimed to have been imprisoned since before the universe. 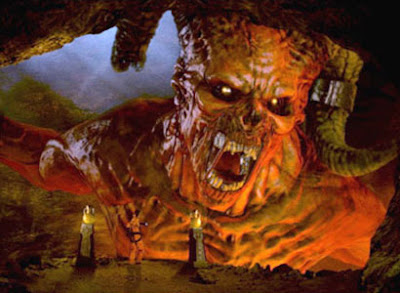 The Beast could manifest himself through electronic media, including computer voices and, crudely through hologram viewers. Its mind could leave its body and possess a single hive mind of the Ood collectively or a single Human individually, though not more than one at one time. He had the power of telepathy and, through a host, telekinesis. Possession of a human subject affected the host's skin, causing strange markings to appear all over their face and body; and vocal chords, allowing them to speak with different pitches simultaneously. Whether a single human or a hive mind, the eyes of those possessed by the beast glowed a fiery red. The Beast could also project fire from his mouth. His hosts could also physically survive in a vacuum indefinitely. The Doctor realized that the Beast, or the Devil, or Satan was "an idea in the minds of men", and not a physical form, and that is why it could manifest into others, and could survive indefinitely after the destruction of its body.
Posted by Joanne Casey at 07:00

Email ThisBlogThis!Share to TwitterShare to FacebookShare to Pinterest
Labels: Beast