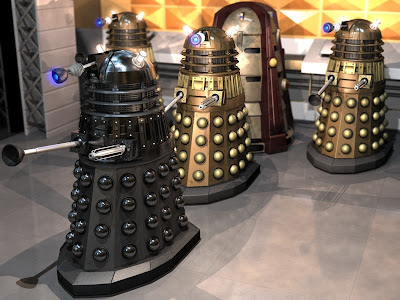 The Cult of Skaro, named for the Dalek homeworld, was a secret group of four Daleks—three Standard Daleks and one Black Dalek—assigned the task of furthering the Dalek cause through the development of new and unorthodox ideas and strategies. The leader of the Cult claimed that it was created primarily to further the process of Dalek evolution. Their willingness to adopt alien modes of thought was demonstrated by the fact that they had individual names, a concept most Daleks found abhorrent. Led by Sec, the Black Dalek, they answered to no one, not even the Dalek Emperor, although they still revered him.

The Cult of Skaro were at first just four ordinary Daleks. Dalek Sec was a commander of a Dalek group sent to wipe out the remnants of the Mechanoids which they succeeded in doing. After doing this all four of them were ordered by the Dalek Emperor to return to him. They arrived and were promoted to become the Cult of Skaro. They were then given their names and Dalek Sec was elected as their leader
Posted by Joanne Casey at 07:00

Email ThisBlogThis!Share to TwitterShare to FacebookShare to Pinterest
Labels: Cult of Skaro