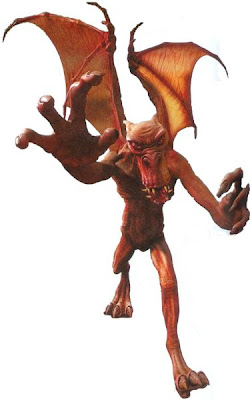 The Krillitanes were bat-like humanoids, though smaller than Humans. They had various shades of skin ranging from pinkish to charcoal gray, sharp claws and a flattened, fanged face. They took their bat-like wings from the inhabitant of Bessan, and they also sleep upside down like bats and have very sensitive hearing. As well as a bat-form, the Krillitanes can create a morphic illusion of a Human (which Mr Finch preferred). Krillitanes are carnivorous and will eat other sentient creatures, but they will also eat rats. They also produced Krillitane oil which can increase intelligence in humans but is currently deadly for Krillitanes. They are aware of the Time Lords and their extinction.

In 2007, a group of Krillitanes led by Brother Lassar had landed in Deffry Vale in London, the arrival of their spacecraft marked by UFO activity and the occasional appearance of a localised orange glow in the sky. They had taken over Deffry Vale High School. Using Krillitane oil and an advanced computer network, they were using the brains and imagination of the students as a type of computer in order to work out the Skasas Paradigm.
Posted by Joanne Casey at 07:00

Email ThisBlogThis!Share to TwitterShare to FacebookShare to Pinterest
Labels: Krillitanes