Gods of Ragnarok and the Psychic Circus 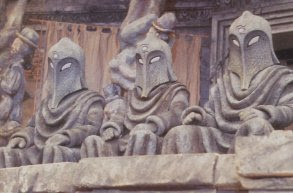 Rag, Nag and Ok, also known as the Gods of Ragnarok, were three evil beings who made sentient beings die for their entertainment.

The Gods were originally Old Ones were from the time before the creation of the Universe. They possessed the ability to exist in multiple times and dimensions simultaneously.

They created the Land of Fiction as a diversion but grew bored and abandoned it.

They existed for a time on the planet Segonax where they took over the Psychic Circus and its entertainers, the Ringmaster and the Chief Clown. Outside their own world, they appeared as a man, a woman and a little girl sitting in the audience, while in another world they appeared as trio of living stone statues. They used the Circus to recruit new performers to perform and to die as punishment for failing to amuse.
Posted by Joanne Casey at 07:00