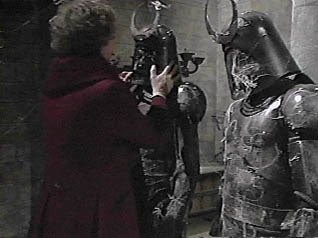 The Gundans were a squad of war robots encountered by the Fourth Doctor in the 1980 story Warriors' Gate by Stephen Gallagher. They were designed by the human slaves of the Tharils and used as a spearhead in the revolution which overthrew the Tharil empire. Designed with the primary purpose to resist and kill Tharils, the Gundans could travel the time winds like their prey and butchered many during the revolt. Each Gundan was armed with an axe and decorated with horns to make the robots seem more fearful. The revolt began on the day of the Great Feast, and several inert and decaying Gundans were found by the Doctor when he visited the feasting hall in the Gateway between the universes. The skeletons of their defeated enemies remained in their seats around the feasting table. The Doctor repaired the memory wafers of a Gundan to discover what had caused the decay of the Gateway.
Posted by Joanne Casey at 07:00

Email ThisBlogThis!Share to TwitterShare to FacebookShare to Pinterest
Labels: Gundans