The Isolus were tiny empathic beings which resembled white flowers with streaming tendrils. They travelled via solar winds.

Isolus were originally born as spores by their mothers. These Isolus would travel through space in heat-powered pods and would grow for thousands of years until they reach their adulthood, and, in order to pass the time, used their ionic power to project fantasy worlds to play in. The ionic power of an Isolus to create these virtual worlds could also bring inanimate objects, such as drawings, to life, as well as transform living things into drawings. These young Isolus also required strong emotions, specifically love, to survive. Isolus travelled in groups of around 4 billion and required constant companionship to feed off the love of their siblings. 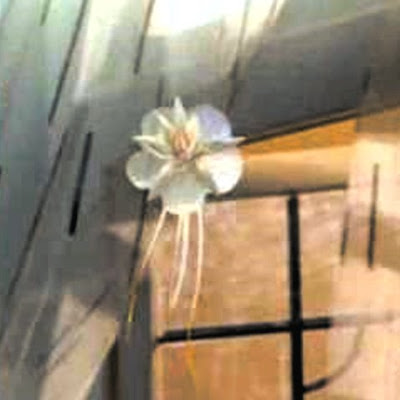 In year 2012, one Isolus was separated from its siblings after a solar flare. It landed on Earth and searched for heat and a friend. It was able to find Chloe Webber, another lonely child. Chloe swallowed the Isolus. Inside Chloe's body, the spore granted Chloe its ionic powers. One child was not enough for the Isolus, though, it tried to use its powers to find more friends.
Posted by Joanne Casey at 07:00

Email ThisBlogThis!Share to TwitterShare to FacebookShare to Pinterest
Labels: Isolus