Slabs were robotic beings, typically androids, used by various races, typically criminals, as basic slave drones. They tended to travel in pairs. They had a vague form as to not provoke suspicion, but their attitude and internal anatomy were very different - they obeyed the commands of their master, they disrespected other beings, did not speak and had the same composition all the way through. 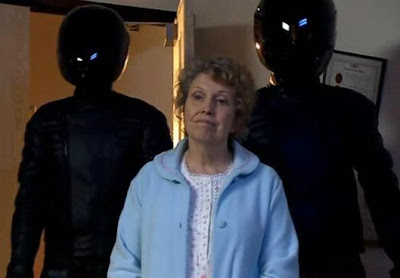 For example, the Slabs used by a Plasmavore, Florence Finnegan, on Earth (and, due to the Judoon's intervention, on the Moon as well) looked like motorcycle couriers dressed in black, but they never delivered anything and were composed entirely of leather, except for their helmets.

They could be "killed" by sufficiently high levels of radiation, or advanced energy weapons.
Posted by Joanne Casey at 19:20

Email ThisBlogThis!Share to TwitterShare to FacebookShare to Pinterest
Labels: Slabs