Reapers were beings linked to Time itself. The Reapers would search out disturbances in time, such as temporal paradoxes, leave the Time Vortex and "sterilize" the area by devouring everything, with older objects being the tastiest and sentient beings of more interest than inanimate objects. 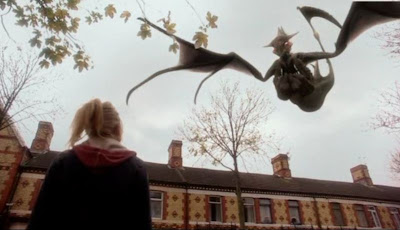 The Reapers appeared as flying reptilian beings with sleek heads, four long hooked arms and mouths on their chests. They engulfed creatures in a flash of light with their mouths, leaving no traces. Despite these powers, they are material creatures (at least they are in this world), and can be blocked. They cannot pass through solid objects, with older objects being more effective barriers. As damage to Time in the form of time paradoxes accumulates, it allows them entry.

The presence of Reapers would seem more prevalent given, as the Doctor explained, other than himself no Time Lords existed to prevent temporal paradoxes. With the Time Lords gone, paradoxes happened with more frequency
Posted by Joanne Casey at 07:00