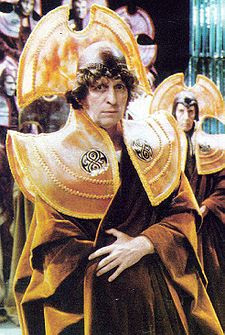 The Time Lords are a fictional extraterrestrial race and civilisation in the British science fiction television series Doctor Who, of which the series' main character, the Doctor, is a member. Time Lords are so called because they are able to travel in and manipulate time through technology to a far greater degree than any other civilisation. The Time Lords' home planet is Gallifrey.

Although the Doctor was identified as an alien, his home planet and race were not identified at the start of the series. Only after six years, in The War Games, other aliens from his world appeared and were named as the Time Lords. The nature and history of the Time Lords were gradually revealed as the television series progressed. Each story to feature them and their home planet added additional layers of complexity and intrigue, stemming from the dissatisfaction of various scriptwriters wrestling with the question of why the Doctor is in exile in the first place. Among other things, Time Lords are increasingly revealed as being corrupted by their inaction and Time Lord society as stagnant. Over the course of the show's initial 26-year run, it was never made entirely clear what purpose or mission the Time Lords served, or what exactly they did with their mastery over time.
Posted by Joanne Casey at 07:00

Email ThisBlogThis!Share to TwitterShare to FacebookShare to Pinterest
Labels: Timelords