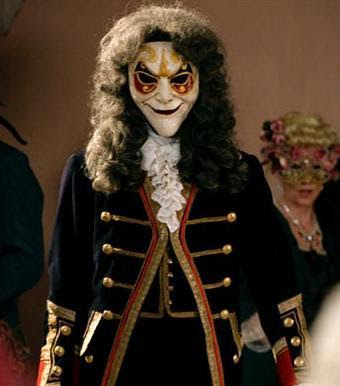 The Clockwork Repair Droids were androids who came to stalk and take Madame de Pompadour's brain in 18th century France, believing it could be used to repair their ship. They wore 18th century French uniform to blend in with the guests

The Clockwork Robots began as repair robots on board the spaceship SS Madame De Pompadour in the 51st century. Their only purpose was to fix the ship if it broke down. When the ship did break down in the Dagmar Cluster, they did not have the right parts and so they used the 50 crew members on board, using their body parts to repair the ship. The last part they needed was a brain and they believed that only a 37 year old brain (the same age of their ship) would work. They modified the ship's quantum drive to open multiple time windows to 18th century France and passed through it at various stages of Madame de Pompadour's life, attempting to find her in her 37th year.
Posted by Joanne Casey at 07:00