Thals were one of two near-Human races which originally inhabited the planet Skaro (the other being the Kaleds). 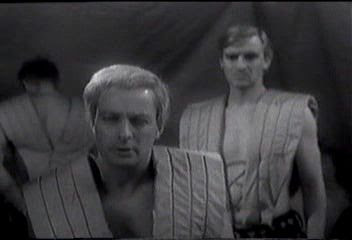 According to Thal history as given in the original Dalek story (1963), they were once a warlike race, but following a terrible war with the peaceful and scientific Dals who shared their planet, they renounced violence and became pacifist farmers. After centuries of this lifestyle, they were forced to take up arms again when the Dals — now developed into the aggressive and xenophobic Daleks — returned and attempted to wipe them out.

That history was revised in Genesis of the Daleks (1975), which revealed the detailed origin of the Daleks. The name of the Dals was changed to the Kaleds, who were a fascistic society involved in a generations-long war of attrition with the Thals (whose use of slave labour did not make them much better). The prolonged conflict had turned Skaro into a wasteland, and radiation sickness was a common hazard. The Kaled chief scientist, Davros, accelerated the mutation of the Kaled species and put the results into tank-like travel machines, which became the dreaded Daleks.
Posted by Joanne Casey at 07:00

Email ThisBlogThis!Share to TwitterShare to FacebookShare to Pinterest
Labels: Thals