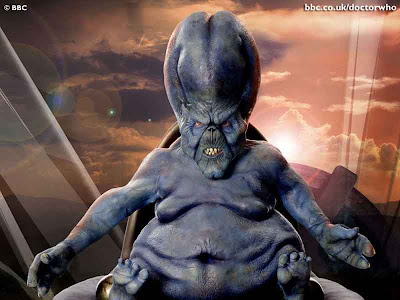 The Moxx of Balhoon was a guest onboard Platform One to watch the destruction of Earth in 5,000,000,000, representing the solictors Jolco and Jolco. He was killed in the heat of the sun's expanding.

His legs were crippled by a disease, so the Moxx chose to travel around on a fast-moving anti-gravity chair. The chair also replaced his body fluids every twenty minutes so that he didn't sweat glaxic acid. He greeted visitors or friends by spitting in their faces.

The Moxx had a brother, Elth of Balhoon, who would attempt to avenge the Moxx's death by kidnapping the survivors of Platform One's sabotage.
Posted by Joanne Casey at 07:00

Email ThisBlogThis!Share to TwitterShare to FacebookShare to Pinterest
Labels: Moxx of Balhoon