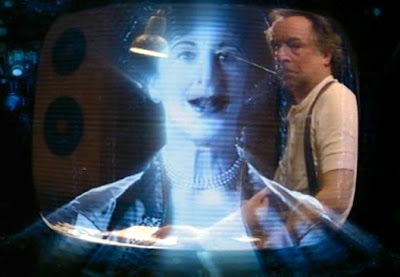 The Wire is an alien life form that was executed by its people, on the planet Hermethica, branded a criminal mastermind of the planet's crime syndicates, but managed to preserve itself as an being of plasmic energy, due to her guard's communication device was on and he was illegally recording the execution, that escaped to Earth.

It concealed itself in television signals, transferring itself from set to set. It fed to off the mental signals of Humans, paralysing them and then leeching out their energy with electrical tendrils. This process would leave the victim mindless, as well as faceless , this monster fed off the face of Rose Tyler. Her face was then trapped in a television set; she was still able to talk. The Wire used the image of a female BBC continuity announcer to communicate with the outside world. It hoped to use this energy to manifest itself in a corporeal form once more.
Posted by Joanne Casey at 07:00

Email ThisBlogThis!Share to TwitterShare to FacebookShare to Pinterest
Labels: Wire