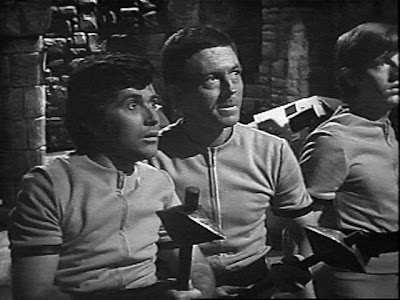 The Gonds were a group of near-Humans who lived on an unnamed planet. Until they revolted, they lived in a state of what the Second Doctor called "perpetual enslavement" to the Krotons.

Very little is known of the Gond society prior to the involvement of the Krotons. However, for some (apparently) considerable number of generations, the Gond were raised with one major goal: selection as a "high mind" by the Krotons. All Gond youth had to submit to a series of academic tests, and, if found to possess a sufficient level of intelligence, were allowed to serve the Krotons directly. This involved entering a special area of the Gond settlement completely controlled by the Krotons.
Posted by Joanne Casey at 07:00

Email ThisBlogThis!Share to TwitterShare to FacebookShare to Pinterest
Labels: Gonds