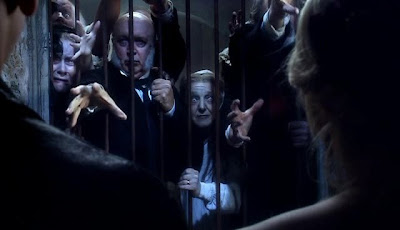 The Gelth were a humanoid species who lost their bodies in the Time War. During the War, billions of Gelth were turned into gas, which they could shape themselves into wraith-like forms. These Gelth needed to be in a gaseous environment to survive.


Discovering the Cardiff rift to Gabriel Sneed's mortuary in 1869, they were naturally attracted to the area, since they could inhabit the gas found in the pipes and emerge through gas lamps. They also discovered that they could survive in the gases in a decomposing Human and as the Doctor put it, "use it as a vehicle". While inhabiting the corpses, the Gelth could control and move the dead humans as walking corpses which leaked out luminous blue gas. The Gelth's control of the corpses was tenuous at best. The Gelth contacted Gwyneth, Sneed's servant, who had psychic ability. She thought of the Gelth as angels. Through Gwyneth, the Gelth spoke with the Doctor.
Posted by Joanne Casey at 07:00

Email ThisBlogThis!Share to TwitterShare to FacebookShare to Pinterest
Labels: Gelth