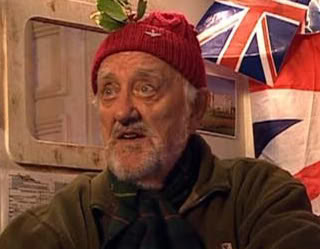 Filming on David Tennant's final Doctor Who story began yesterday with the return of the actor Bernard Cribbins. Cribbins, who plays Donna Noble's grandfather Wilf, was last seen in the Series 4 finale, Journey's End and first appeared in Doctor Who in the 1966 film, Daleks' Invasion Earth: 2150AD. which was based the television serial The Dalek Invasion of Earth

Trailer News: To be aired on Wednesday on BBC1 during the ad-break at 9pm between Waterloo Road and The Apprentice.
Posted by Gary at 20:55