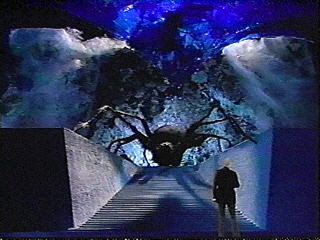 The Great One was a gigantic spider who reigned as the matriarch of the Eight Legs. She sought to rule the universe and needed only the crystal which the Doctor had stolen and taken to 20th century England.

The Eight Legs obeyed the Queen Spider who also obeyed the Great One. Being physically giant the Great One lived in a cavern made of blue Metebelis crystals. With her psychic power she could read the Doctor's mind and discovered how much fear she put into him. Obtaining the Doctor's crystal, which was the last perfect crystal she needed, she completed a web of the crystals which lay above her head and she was able to unlock her mind.

Infinite power and knowledge was being fed into her mind but since there was no way to vent it, radiation from the crystals built up within the web and the crystals burned her mind, destroying her.

Email ThisBlogThis!Share to TwitterShare to FacebookShare to Pinterest
Labels: Great One