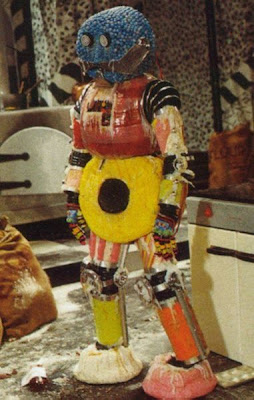 The Kandy Man (or Kandyman) was a pathological, psychopathic robotic killer who was employed by the egocentric Helen A. The Kandy Man delighted in creating methods of torture and destruction using confectionery, such as drowning people in sugary solutions like its "fondant surprise". It was a sadistic monster with a very warped sense of humour, speaking with a squeaky metallic voice and producing deadly sweets. These sweets were supposed to be so good that humans were unable cope with the pleasure and died. The Kandy Man claimed most of its victims in this manner — "with smiles on their faces" — but this did not mean it was not perfectly happy to throttle them if they refused to co-operate.

Composed of things like sherbet, marzipan and caramel, Kandy Man was created by Gilbert M, with whom it shared an almost symbiotic relationship. The Doctor encountered the Kandy Man after escaping from the Happiness Patrol. He outsmarted the Kandy Man, causing it to smash a bottle of lemonade and stick itself to the floor — it had to keep moving or its constituent ingredients would coagulate. The Doctor escaped, but later returned to the Kandy Kitchen to confront the Kandy Man, forcing it to retreat into the pipes. The Kandy Man died shortly afterward when its external candy shell was dissolved in a pipe by strawberry fondant surprise released by the oppressed Pipe People.
Posted by Joanne Casey at 07:00