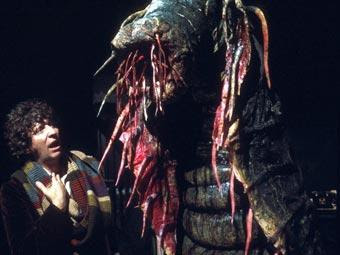 The Fendahl were a gestalt organism, from the original Fifth Planet of the Sol system. They were composed of two parts, a Fendahl Core and the Fendahleen. The Fendahl posed a threat to all life. Thirteen physically separate organisms make up the Fendahl. The skull of the Fendahl Core which transported itself to Earth resembled a Human skull in every respect, but for a pentagram shape in the forehead, visible only by an x-ray. Each Fendahl Core had twelve Fendahleen, large eyeless and limbless creatures with a fringe of pink tentacles around and two large fins above their mouths. Table salt, which affect the electrical conductivity and osmotic control of their cells, was fatal to them.