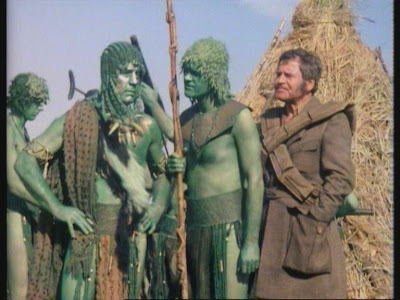 The Swampies were a race of green-skinned humanoids from the planet Delta Magna. They had a low level of technology, which meant they were easily evicted by the Humans. They generally used spears and lived in grass huts.

The Swampies were originally native to Delta Magna, but were moved to Delta Three, one of the planet's moons by Human colonists, who they referred to as "dry foots". (They did have Human allies in the form of the Sons of Earth, though evidently the Sons' form of support proved ineffective.) They predicted this with their sacred relic, actually the fifth segment of the Key to Time and accepted this movement. The colonists also transplanted several Giant Squid to the moon for the Swampies to hunt. One of these ate the sacred relic and mutated into the "god" Kroll. When the Humans discovered that methane could be gathered on the moon and set up a refinery to gather it, as well as protein which would go to Delta Magna. This angered the Swampies, who turned to a religious leader, Ranquin.

Email ThisBlogThis!Share to TwitterShare to FacebookShare to Pinterest
Labels: Swampies