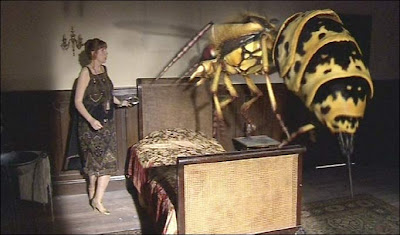 Vespiforms were a species of insectoids which resembled oversized (nearly three metres long) wasps. They were powerful creatures, with large stingers which could be regrown within hours of use. They had the ability to transform into the guise of other species, even to the extent of near-Humans. The transformations were accompanied by a glowing, purple-pink haze and left behind morphic residue. When in another form, Vespiforms were genetically compatible with the mimicked species - they were even able to breed with members of the species.


Vespiforms also had telepathic recorders, an essential part of their mind which could record motivations for them. One such recorder, the Firestone, ended up in the hands of Clemency Eddison in 1885.
Posted by Joanne Casey at 07:00

Email ThisBlogThis!Share to TwitterShare to FacebookShare to Pinterest
Labels: Vespiform