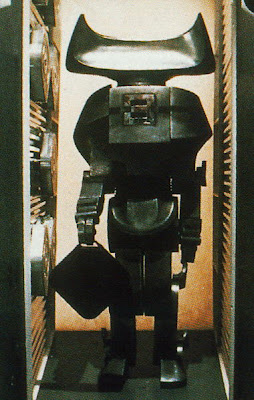 Drathro, called the Immortal by humans, was an L3 maintenance robot created by the Three Sleepers to watch over them and their secrets while they rested in suspended animation. It was in charge of the underground Marb Station on Ravolox in 2,000,000,000 CE.

Drathro was created in the Andromeda Galaxy and placed as guardian over the Sleepers. He used the 500 humans of Marb Station, which he called "work units", to keep the Sleepers alive and he used two humans, Tandrell and Humker, as his personal assistants.

Both he and the Station was powered by a black light converter on the surface. He also made use of an L1 robot and a train guard named Merdeen, who helped humans to escape to the surface without Drathro knowing.
video link
Posted by Joanne Casey at 07:00