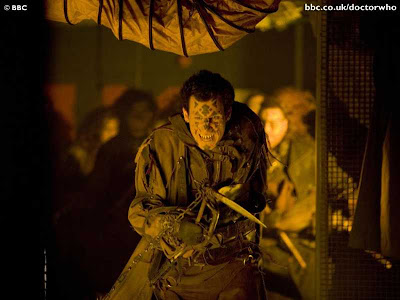 
The Futurekind were a primitive race, who possessed little technology, wearing simple animal skins and hunting with primitive spears and makeshift weapons.

They also tattooed and cut themselves in various patterns, possibly as a way of identification or to inspire fear in their enemies.

The Futurekind appeared on Malcassairo around the end of the universe. Little was ever known about them, except that they learnt to hunt Humans for flesh, as there was little else on the planet for food.

There was, however, a myth amongst the refugee Humans that if Humanity did not reach the planet Utopia they themselves would evolve into Futurekind, making Futurekind merely mutated Humans. They permissibly died out when the Universe had ended, when Malcassairo had finally nova-ed later on that year.
Posted by Joanne Casey at 07:00

Email ThisBlogThis!Share to TwitterShare to FacebookShare to Pinterest
Labels: Futurekind