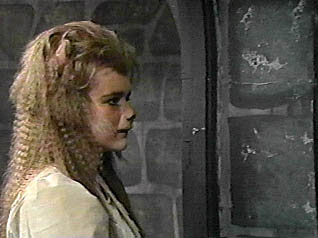 The Tharils were a humanoid leonine species from The Gateway encountered by the Doctor.

Gifted with time sensitivity, the Tharils used the Gateway between N-Space and E-Space as a portal for access to multiple dimensions by riding the time winds. They built an empire based on terror and slavery, descending on other planets and enslaving their populations. However, the Human slaves of the Tharils fought back and designed the Gundans, killer armoured robots which were able to stand up to the Tharils, pursuing them along the time winds, and butchered many of them on the day of the great feast.

As the Tharil empire and dominion crumbled, the Human species began to exploit their former masters in a continuing cycle of oppression. The Tharils now became the slaves, used as forced navigators of the time winds and traded as rare and valuable commodities. Ships such as the Privateer under Rorvik which became moored in the Gateway were built of the dense dwarf star alloy to prevent the Tharils escaping. When Rorvik’s privateer became stuck in the Gateway the Doctor and Romana befriended two Tharils, Biroc and Lazlo, and they explained the history of the Tharil race to them. The two Time Lords helped to free Tharils still trapped in the privateer. Romana stayed behind in the Gateway to help the Tharils build a new life based on freedom and equity.
Posted by Joanne Casey at 07:00

Email ThisBlogThis!Share to TwitterShare to FacebookShare to Pinterest
Labels: Tharils