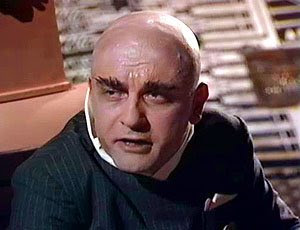 The Usurians didn't need to breathe and looked like a small handful of green kelp in their natural form, although they belonged to the fungus, not vegetable kingdom. They could assume the shape of a dwarfish humanoid as long as they constantly exposed themselves to particle radiation. They were listed in Professor Thripsted's Flora and Fauna of the Universe as poisonous fungi.

Though they were originally a war-like race, this was inefficient and so they turned to commerce, creating the Company. Apparently very knowledgeable, their databases contained information on Gallifrey (which they did not consider a viable market for their consumer products) and knew of the Doctor's previous acts of "economic subversion".
Posted by Joanne Casey at 07:00

Email ThisBlogThis!Share to TwitterShare to FacebookShare to Pinterest
Labels: Usurians